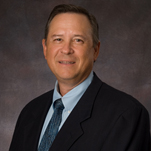 Dr. Keator holds a bachelor of science degree from Louisiana Tech University and an Optometric Doctor degree from the University of Houston College of Optometry. Dr. Keator was a Captain in the U.S. Air Force before entering private practice in Natchitoches in 1979. Dr. Keator and his wife Marian are the parents of Amanda, Todd, and Bryan. They are also the proud grandparents of six. They are members of Trinity Episcopal Church where he is a former Vestry member. He is a former director on the board of the Natchitoches Chamber of Commerce and the Natchitoches Country Club. Keator has also spent time as a member of the Louisiana Lions Eye Foundation Board and is a past member of the Louisiana Optometry Board of Examiners.